I Had a Dream 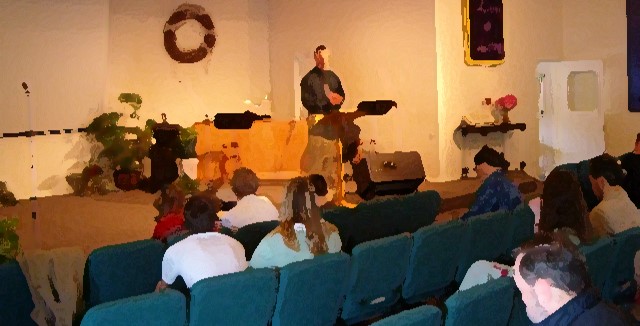 As I shared a few weeks ago in the sermon, I recently had an unusually vivid dream. I was preaching a sermon in the old building. The room was mostly full and everything was going fine. I remember Stacy Walters was there in his familiar place near the front and the atmosphere was good, like it usually was.

I was about to share some kind of illustration for a point I was making when suddenly we were having trouble with our audio/video system. I think it was a video clip I wanted to show but it wasn’t working. Even worse, the tech was some teenager with headphones on who was listening to his own music and not paying attention to anything going on in the room. I was looking up at him to play the video clip and he was just bopping his head to the music with his eyes closed, oblivious to anything else. I was irritated.

The situation got even worse when his music somehow started playing over the sound system, interrupting the sermon even more. A few people went up there to get his attention and began to try and figure out what the problem was with the system and they were soon up to their arms in cables, checking connections and wiggling wires. As this was going on, people began to chat among themselves as they waited for the sermon to resume. As the wait time increased, the congregation began to mill about, visiting with one another and moving around a bit. Some went to get coffee or use the restroom and still the tech problem wasn’t resolved.

Finally, everything was working again and I gathered up my notes and my Bible as I made my way back to the pulpit. But when I was finally ready to resume the message, I looked up and was stunned to realize everyone was gone. The room was empty. Even the seats were gone. It was just a bare floor empty room.

I still had a half hour to sleep, but I couldn’t help pondering the dream. I’m not real big into dream interpretation. Perhaps it meant we would have seven years of terrible sermons, so awful that no one would be able to remember any of the good sermons that came before. I contemplated a plan to stockpile good sermons to get us through the lean years. No, that’s just silly.

Then the thought came to me: Preach the Word. Everything else is unimportant in comparison. Illustrations and sound systems are ancillary. Scripture is primary.