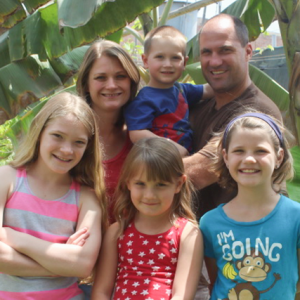 The Andersons long felt called to missions, and have ministered with Kids Alive International since the fall of 2010. Kids Alive is an organization that “reflects the love of Christ by rescuing orphans and vulnerable children, nurturing them with quality holistic care and sharing with them the transforming power of Jesus Christ so they are enabled to give hope to others.” While Kids Alive is doing work in many countries, the Andersons minister in Peru.  Dan serves as the Country Director for Kids Alive Peru.

Both Dan and Katie have significant ministry with a children’s home in Peru.  They have three daughters—Lucy, Lydia and Davy, and one son, John.

Seth and Jessica with their two daughters, Molina and Marcie, and their son Milo, also serve with Kids Alive in Peru. Both Seth and Jessica grew up as missionary kids in Papua New Guinea. Jessica spent two years in the Dominican Republic working with at-risk teens. She was introduced to the local Kids Alive ministry and participated in service projects with them. They love serving the children in Peru. Seth enjoys learning new hands-on skills and has had many different types of work opportunities as a result. He enjoys putting them to work in ministry. Seth is working on facilities maintenance and Jessica is hosting teams along with taking care of their children. 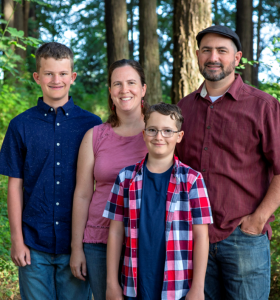 Joel grew up in Haiti as a missionary kid.  He is the son of Bruce and Cindy McMartin. Andi grew up in Portland where her father pastors a church. They met at Multnomah Bible College and were married in 2003. They have two children, Ethan and Tyler.

Ever since they were married, they knew that they wanted to be missionaries. God placed a desire in their hearts to work with people around the world who have never had the opportunity to hear the Word of God. After years of training, they departed for West Africa in 2011. Over their first term on the field God filled them with a love for West Africa and especially for the small church he has established there. They now serve in various roles including working alongside local churches and pastors in the formation of an African missionary training program, supporting missionaries who are out in isolated locations, and mentoring newly arriving missionaries through language and culture study. In their ministry they use the Wolof language and work to build relationships with local people from Senegal as well as building discipling relationships.