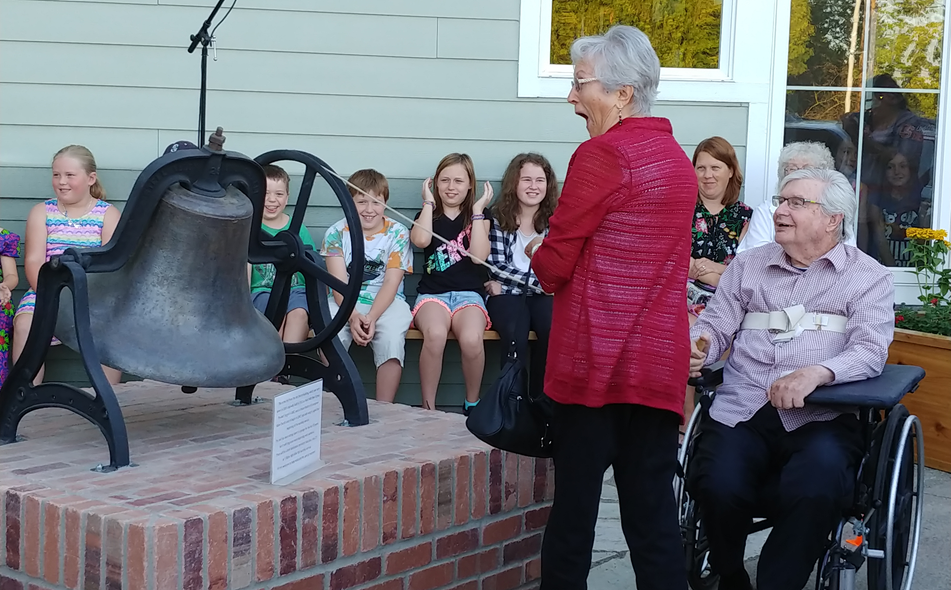 Last Saturday night’s worship service included a delightful little story God has been writing for over a century.  It began in 1892 with the forging of 425-pound cast steel alloy bell.  Bells such as these were standard equipment for schools and churches in those days, and this one was apparently purchased out of the 1895 Montgomery Ward Catalogue.  Page 395 offers ‘Bells In Great Variety,’ including Steel Alloy Bells for school, factory or church. They boast superior tone and are warranted against breaking under normal use for two years. The 28-inch model was selected and installed in 1912 in the newly constructed West Mill Plain School here in Vancouver.

The school began to be used for Sunday School classes in the 1930s, and in 1947 the school bell became a church bell, as Evergreen Bible Church was established and purchased the school for their meetings. The bell was typically rung right at 11am to signal it was time to worship the Lord. The ushers oversaw this task, but they often accommodated the fervent pleas of youngsters who begged to be lifted up so they could pull the bell cable. The bell was so heavy it often took all their weight to pull it down, and they would be lifted out of the ushers’ hands on the backswing.  Kids remember things like that. So do ushers; especially Ron Simcox.

Ron has more history with that old bell than anyone. Ron was a student at West Mill Plain and the ringing of that bell meant it was time to make a run for it or else be late. When the school became a church, Ron was one of the early members and it was fitting that he was tasked with ringing the bell that had called him to school and Sunday School for so many years.

However, the bell went silent in 2009 as the old building was torn down to make way for our new facility. We originally thought we would install the bell in a new tower, but at an estimated cost of nearly $30,000 it never seemed a wise use of funds. Finally, a plan for installation near the ground was conceived that we could do ourselves for a tenth of the cost. The project was recently completed and last Saturday night we dedicated it to the Lord, ringing the bell for the first time in 10 years.

God’s grace was seen in that Ron felt well enough to come join us Saturday, and we asked him to do the honors. But there is one more piece that was even sweeter. Ron needed a little help to ring the bell, but who should I ask? Standing right there was a wonderful woman named Louella. She is relatively new to our family and had not even heard about the bell dedication. But it turns out she also had gone to school and Sunday School in the old building. It couldn’t have been more fitting to have these two old classmates renew the tradition of the call to worship. Our prayer is that many in our community would answer the call and be drawn to the Lord.